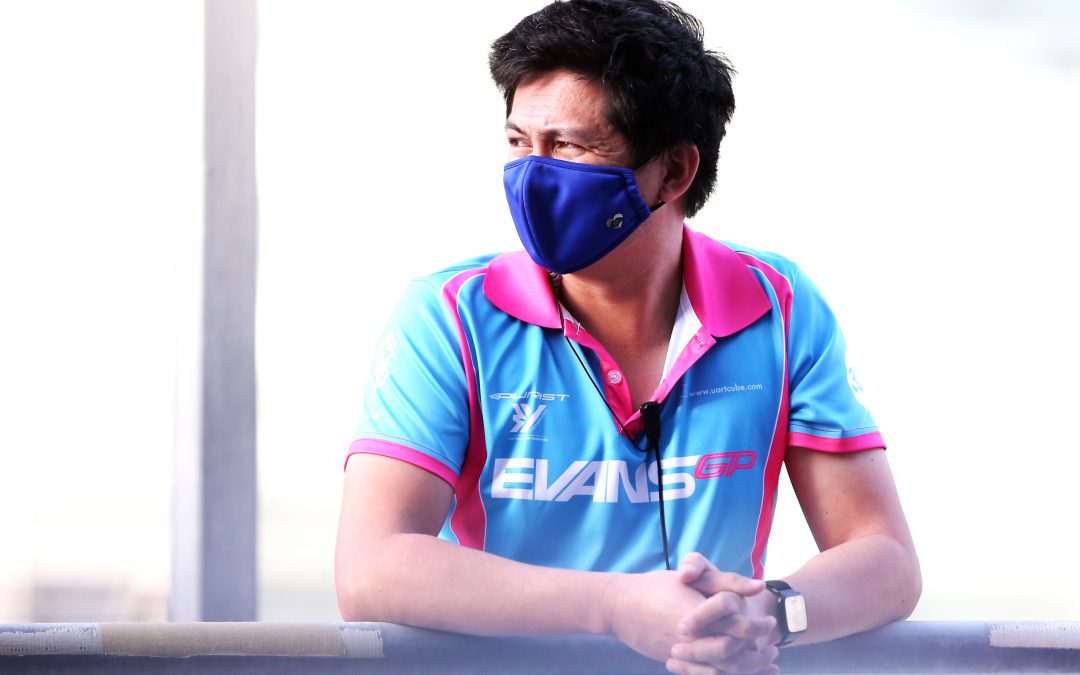 Motorsport Prospects: Josh Evans of Evans GP on Racing in Asia and Australia, Running a Race Team during Covid and Advice to Young Drivers

The Asian F3 series took a huge jump in competitiveness in 2021 and Evans GP, a new team formed in 2020 was at the front end of the action on track. Recently I spoke to Team Principal Josh Evans about the series, running a racing team during Covid and his advice for young drivers.

Motorsport Prospects: How did you get involved in Motorsports?

Josh Evans: From a young age I had a passion for racing. I remember as a child pulling apart and building billy carts and BMX bikes and racing the other kids in my street. I guess that’s where I was bitten by the “racing bug”.

From there I studied Motorsport Engineering at a technical college in Australia. During this time, I undertook work experience with a number of racing teams which was invaluable to me.

With that work experience under my belt, I was able to obtain employment with organisations such as MoTeC, Sonic Motor Racing and Alan Docking Racing.

Working for a successful team such as Sonic from a young age really gave me the right foundations to grow and build a career in the sport.

MP: How long has Evans GP been around and why did you start it?

JE: Evans GP has only been around as a race team since late 2020. In the years prior to this I was team manager and engineer for BlackArts Racing which was based in China and Malaysia. And before that I worked for numerous teams in Australia and Europe.

I decided to start Evans GP as I could see there was an opportunity to provide a European-style of service to the Asian, Australian and Middle East markets.

Although I had achieved success with other entities in Asia including the 2019/20 F3 championship win, I could see the level of competition increasing.

For example, Prema, arguably the dominant team in Europe, was entering the Asian F3 championship with two Formula 2 race winners.

I believed that if we were to take the next step and compete with these teams, it would need to be done as my own entity. That way I would have control of the decisions and direction of the team.

As we have shown this last season, Australasian teams can really take it up to the best junior open wheel teams in the world.

MP: What do you look for in a driver?

I know it is a bit of a cliché but without these two ingredients it is difficult to perform on track.

What I mean by the “right attitude” is someone that is hard working, willing to listen, learn and adapt, gets along with crew and partners; but also having a competitive, and sometimes ruthless streak.  They have to be willing to do whatever it takes to be successful.

JE: There are a number of reasons why we entered Asian F3. The main reason being I had a lot of experience with F3 and the Asian series and knew we could put a highly competitive team together.

The series is managed professionally by ex-racers that understand what teams and drivers require for their series to be successful.

I also chose this series because it is a category that is recognised by the FIA on its road to F1 pyramid. Drivers are able to obtain a healthy amount of Superlicence Points which is critical for drivers looking to reach F1.

And I think the series provides a great opportunity for drivers looking to gain experience in a car that is also used in Europe, competing at F1 and Grade 1 circuits for a fraction of the cost to race in Europe.

It is the ideal steppingstone between F4/Formula Ford and F3 in Europe.

MP: How competitive is the series compared to other F3 series?

JE: Asian F3 has always been quite competitive but it really took another step this last season.

Just this last season we have seen multiple drivers coming from F1 junior programs competing in the series. Ferrari, Alpine and Red Bull all had junior drivers competing.

Teams such as Prema and Hitech have really raised the bar. They are the leading teams in Europe and have won multiple championships and races in International F3 and F2.

I think this is great for series and when we have beaten them on track it has made the wins much more rewarding and satisfying for our drivers and crew.

MP: Budgets are high. What recommendations can you give a young driver on attracting sponsorship and raising a budget to race at this level?

JE: Raising a budget for junior levels of motorsport isn’t easy. The exposure that sponsors get at this level can be quite limited if the partnership isn’t managed correctly.

From what I have seen, the most realistic opportunity for young drivers is with businesses or wealthy individuals that already have a connection with the driver and/or their family. This is because there is already a level of trust and familiarity established between the driver and the partner.

I would also recommend that drivers find ways to build their network and inform people of what they are doing. Show people how aligning with your racing career will benefit their business.

The most logical way of doing this is via social media, newsletters and a website. Often, many junior race series won’t have high exposure via TV and print and it is completely up to the driver to activate the sponsorship. If you don’t have a large following online, it will be difficult to get the exposure the sponsorship requires.

Finally, I would also recommend competing in a championship that provides a good balance between the cost to compete compared to the amount of exposure the series attracts.

This is one of the reasons why I choose Asian F3, the relative cost to compete is low when compared to its global exposure.

For example, our overall viewership on all live streaming platforms from the 2021 season was over 19 million. Due to our series having front-running drivers from China, India and Europe our potential reach is significant.

This is high value if you have a partner that operates globally and one of the reasons, we can attract international brands to our team such as clothing label Oloi Inc.

MP: What are your thoughts on the domestic racing scene in Australia?

JE: Overall, it is very strong. Australia really is the “lucky country” in regard to racing as we have a very well managed and supported touring car category in V8 Supercars.

Having a high-level category like Supercars really benefits the whole local industry as it gives drivers, engineers, mechanics, etc. in the junior categories something to aspire and work towards.

It also helps many other local businesses that provide support services which in-turn provide employment opportunities to thousands of people.

Possibly one of the biggest weakness in Australian motorsport at the moment is the local open wheel scene and clear pathways for drivers that want a career in open-wheelers overseas.

Karting is reasonably strong, and Formula Ford is still going but the step after this can be confusing and daunting to young drivers and their parents.

I think Asia provides the ideal stepping-stone in that the cars are identical to those raced in Europe and the USA, and the tracks we have in Asia are “European-style”. However, the budgets when compared to Europe are much more affordable.

MP: What are your short-, medium- and long-term goals for Evans GP?

JE: In the short term we aim to win the Asian F3 Championship.

We were able to achieve multiple race wins and finished 2nd in the team’s championship in our first year of competition. We have identified numerous areas in which we can further improve so it is only natural that we aim to win the title next season.

Just like our drivers, our aim is to progress to higher levels of competition and other international series’.

We have made some initial investigations into championships such as Formula 4 and Regional F3 Europe, as well as GT3 competition but our main focus for now is the Asian F3 Championship.

We also have a few Formula Ford’s in Melbourne which we may look at running in the future if we can put the right packages together for the right drivers.

MP: How difficult has it been for you and the team with the continuing effects of Covid?

JE: The travel restrictions have been quite difficult. In the lead up to the championship just past there was a lot of uncertainty and the calendar had to change a number of times before the season started.

This made it quite difficult to attract drivers and some potential drivers weren’t even allowed to leave their home countries.

It’s also had an impact on our staff and budgets as we have had to arrive at events much earlier than usual as well as quarantine for long periods after the season.

I think I have undertaken at least a dozen PCR nasal swab tests and the rest of the crew has done the same. With each test costing between $50-$100 it adds up over the course of a season.

Having a said all that, I think we were very lucky to be able to undertake our season. Many people and businesses have been finding it very tough over the last 12 months, so I am grateful to the series organizers, our partners and customers for giving us the opportunity to compete in a safe manner.

MP: What is the biggest challenge in running an open wheel team at this level?

JE: In my opinion the biggest challenge and most important element for any racing team is securing and retaining the best people available – whether that is engineers, mechanics, drivers, coaches, marketing personnel or administration staff.

People are the most important resource and are what separates the leading teams from the back markers.

In F3 for example, all teams have the extract same chassis, same engine, same dampers, everyone basically has the same equipment and tools, and we all work to the same set of regulations – the difference is the people.

MP: Any thoughts of getting involved in sports car racing?

JE: It is something on our radar. We have been approached by a group that would like us to enter a team in GT3 competition.

Our main focus is Asian F3, so any other projects we do would be a separate entity to ensure our attention and resources are not compromised.

We are looking into it and if the conditions are correct and it makes business sense then we would certainly be interested.

MP: Final thoughts and words of advice to young drivers?

JE: Never give up.