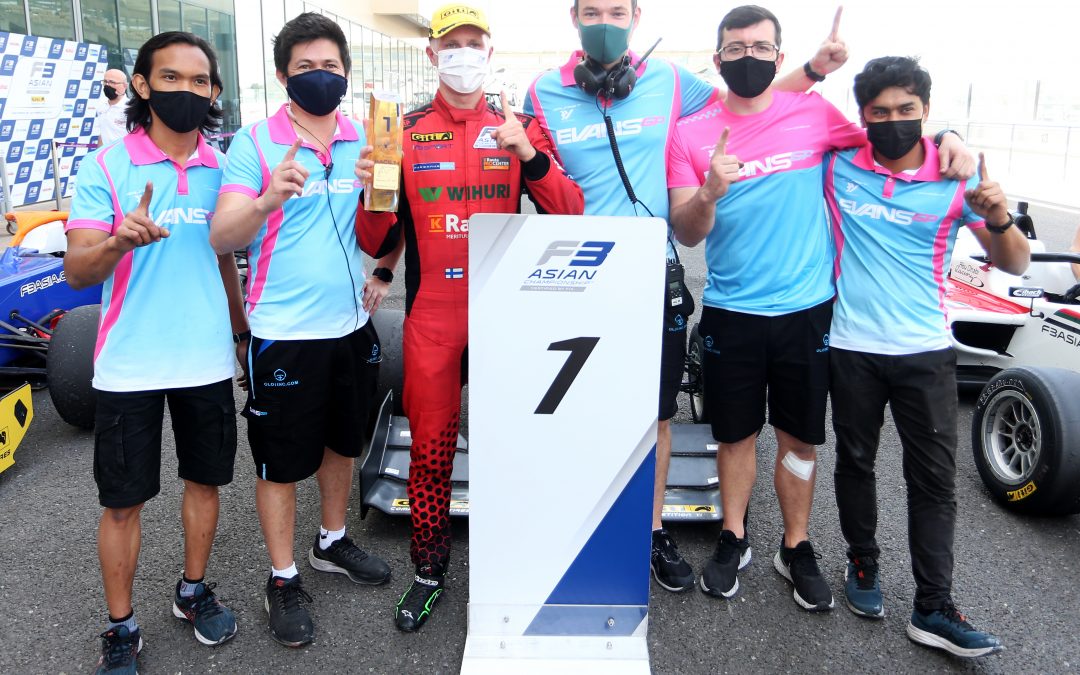 Last weekend the 2021 Asian F3 Championship concluded with its Round 5 finale as the series returned to Abu Dhabi’s famous Yas Marina F1 Circuit. In the night race on Friday and two races on Saturday, Evans GP capped off its debut season with its most incredible performance to date. With Evans GP drivers the most successful race finishes of the weekend in terms of points, the team ended the 2021 Asian F3 Championship with newfound dominance thanks to some technical improvements and better understanding of the GITI race tires.

Patrik Pasma took into the top 3 in Test Session 2 in the OLOI car after leading most of the session fresh off his race win in Round 4. Alex Connor and Irina Sidorkova made steady improvement with Connor doing his first-ever laps of the Yas Marina F1 Circuit.

Pasma led the entire session to finish fastest of the 21 international drivers, with Alex Connor and Irina Sidorkova continuing to improve their performances.

Pasma took P2 in both sessions just off F1 Test Driver Guanyu Zhou, for front row starts in both Race One and Race Three.  Alex Connor took to the top ten in only his second day behind the wheel at the Yas Marina F1 Circuit, while Irina Sidorkova made continued gains.

With Patrik Pasma starting on the front row in P2, Alex Connor P11 and Irina Sidorkova P17, on the start Pasma dominated over pole sitter Guanyu Zhou, boxing him out for the run into the turn one left-hander. From then on, Pasma stayed in front for a dominant lights to flag win in the OLOI F3 car, while setting the second fastest lap of the race which put him on another front row start for Race Two.

Meanwhile in the opening laps Alex Connor had made it up to P7, then settled into P9 just behind F2 racer Juhan Daruvala for much of the race. Unfortunately Connor had to pit with a technical issue towards the end of the race and finished P17, while Irina Sidorkova moved up multiple positions from the start to finish a strong P14 of the 21 drivers.

With the starting grid order determined by the laptimes of Race One, Patrik Pasma started on the front row again in P2 after setting the second fastest lap in Race One less than two hundredths off of F1 Test Driver Guanyu Zhou. Alex Connor started P14 and Irina Sidorkova P18.

Pasma once again immediately jumped into the lead when the lights went out, overtaking Zhou into turn one, with Sidorkova jumping up to P13 on lap one.

Pasma extended to a dominant lead by lap three, and held onto take his third win in the OLOI, Inc F3 car in just four races while also setting the fastest race lap.

Irina Sodorkova finished a strong 12th of 21 while Alex Connor unfortunately had a DNF after an incident with Khaled Al Qubaisi.

With the starting grid determined by the Qualifying Two results, Pasma once again started on the front row in P2 with Alex Connor in P10 and Irina Sidorkova in P19.

Pasma held onto P2 on the start and did a brilliant job during the race of holding off F2 driver Jehan Daruvala, who was on new slicks. Pasma managed to keep his position throughout the race and finish 2nd on the podium, earning valuable team and driver points.

Thanks to another stellar performance from the 3Y Evans GP Team OLOI drivers and team in Round 5, at yesterday’s conclusion of the 2021 Asian F3 Championship Evans GP managed to take an amazing 2nd in the Team Points in its debut season. In the Driver Points, Patrik Pasma finished 4th overall and picked up 10 Super License points, with Isack Hadjar taking 6th overall and picking up 4 Super License points, despite Hadjar only competing in 3 of 5 rounds.

Evans GP Team Principal Josh Evans said, “It’s amazing to finish 2nd in the Team Championship, splitting the two Prema teams to take runner up in the final points. Of course a lot of this is thanks to our strong performance in the final round, not just the podiums and win in the previous rounds. Thanks to continual improvements in our understanding of the GITI race tires, we are able to take to the front of the field.”

“To achieve this success in our first season of racing is quite special and we give a huge thank you to our great crew, drivers, and partners, as well as the series organisers and fellow competitors who put together a fantastic series this year. Without all of this we couldn’t have achieved the great result for the team. We are already looking forward to trying to go one better next season!”

With the Asian F3 summer series already in the works, Evans GP and its team sponsor OLOI, Inc and technical partner 3Y Technology will have their work cut out for them as they look to continue the team’s incredible debut season performance. For more information on Evans GP, available drives and further team updates, please visit www.EvansGP.com.

Evans GP Team sponsor OLOI is a San Francisco-based motorsports-inspired line of apparel which focuses on blending performance with time-proven classics in its product line. To visit their exciting catalog offerings and promotions, please visit: www.OLOIinc.com.