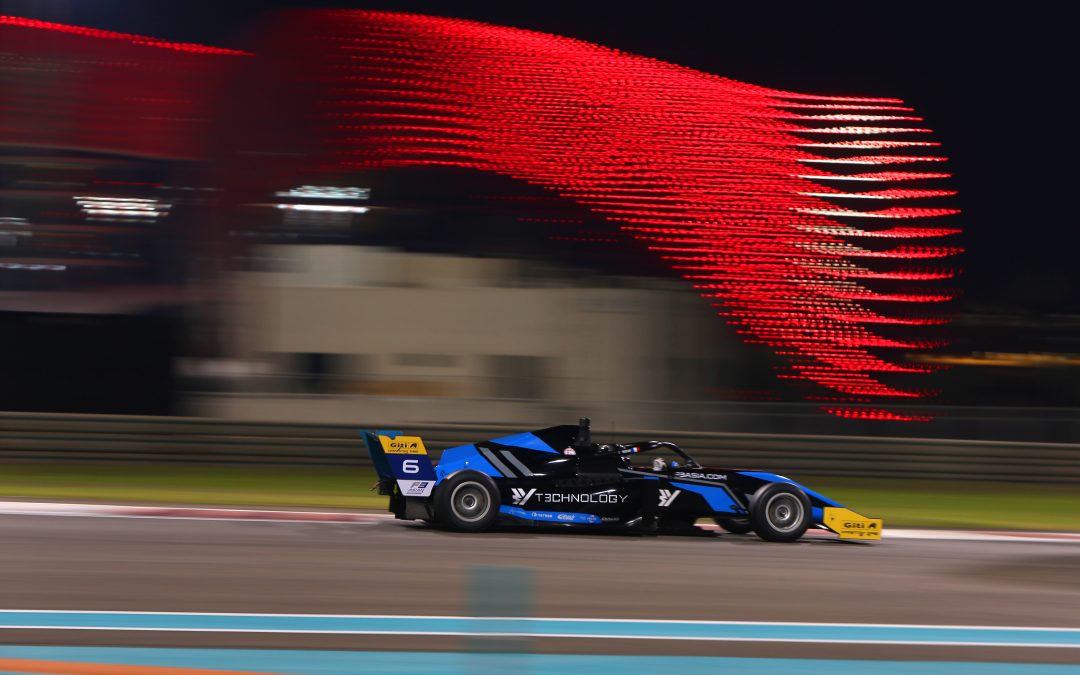 Yesterday saw the exciting conclusion of the 2021 Asian F3 Championships Rounds 2&3 double header at Abu Dhabi’s incredible Yas Marina F1 Circuit. With 3Y Evans GP Team OLOI continuing its fight against some of the top drivers and teams in the world, the Australian-owned, Sepang-based team had an amazing double header. While not without setbacks, in typical style the team ended on a solid note heading into next week’s Round Four at Dubai Autodrome where the exciting 2021 Asian F3 Championship will start coming down to the wire with its 17 nation, 23 car field consisting of some of the top formula teams and drivers in the world.

On Wednesday, 3Y Evans GP Team OLOI got off to an ideal start for Round 3 with Test Sessions One and Two. Under typical sunny and warm Abu Dhabi Yas Marina F1 Circuit weather which would remain in place for Rounds 2&3, Patrik Pasma topped the timesheets of Test Session One until very end of session when Isack Hadjar bumped him out for P1, for a 3Y Evans GP Team OLOI 1-2. In Test Session Two, Hadjar was once again fastest, in an 8pm session held under the famous evening backdrop of the Yas Marina F1 Circuit.

In Thursday morning’s Official Practice, Hadjar took P4 and Pasma P9 with Casper Stevenson off to a solid start in Yas Marina with a top ten ranking.

In qualifying sessions marred by red flags, in Qualifying One Hadjar took 2nd and Pasma 6th, with Hadjar off pole by only 0.146sec. Casper Stevenson took P12 and Irona Sidorkova took P19. In Q2, Pasma took P4 and Hadjar P5 to place the duo on rows two and three for the start of Race Three for 3Y Evans GP Team OLOI.

Thursday afternoon’s race one saw Hadjar starting just off pole thanks to a brilliant Qualifying One earlier in the day, with Pasma on row three. On the race start, Hadjar dropped to P3 while Pasma moved from P6 to P5 on the first lap. As the race continued, Hadjar fought for P2 against F1 test driver Guanyu Zhou, at times able to make pass attempts but with the French F4 driver not quite able to get enough of a run to pass the highly experienced F2 racer.

In the end, Isack finished third on the podium with the second fastest lap of race by 0.006 sec, and teammate Patrik Pasma in 4th. Casper Stevenson took 14th while Irina Sidorkova improved several positions to finish 17th.

In Friday morning’s race, with the grid order determined by the laptime rankings of Race One, Hadjar started P2 while Pasma started P6, Stevenson P16 and Sidorkova P21. On the start, Pasma immediately jumped into P5, and Sidorkova picked up a full four positions to get up to P17 by the end of lap one.

With Hadjar having held his P2 spot on the start, for the remainder of the race viewers witnessed F3 rookie Hadjar’s amazing fight for P1 against F2 race winner Jehan Daruvala. With the French F4 driver right on Daruvala’s gearbox throughout the race, Hadjar put up a great battle but with F2 racer and Red Bull Junior driver Daruvala’s F2 and F3 experience, the Indian was able to just hold off Hadjar until the finish. Hadjar crossed the checkered 0.268sec behind Daruvala, with Hadjar setting the second fastest lap of race by 0.027 sec.

On the start, Hadjar immediately jumped into P3. Unfortunately on the starts, teammate Patrik Pasma had contact with Dino Beganovic going into Turn One and spun, but was able to rejoin in 18th position, while Stevenson and Sidorkova came together with Alessio Deledda, ending their race and bringing the safety car out.

In the end, F3 rookie Hadjar took 3rd on the podium for an amazing three podiums of his first six F3 races, while Pasma had a strong charge up the field to finish 11th.

Due to a hand injury sustained in the crash the day before, Irina Sidorkova was unable to join Round Three but will continue from next week’s Round Four at Dubai Autodrome. Meanwhile, Casper Stevenson had to exit the Championship due to a muscle-related issue.

With 3Y Evans GP Team OLOI down to two cars for Round Three, the pressure was on for Hadjar and Pasma who took P4 and P5 in Saturday morning’s Official Practice.

In Saturday’s Qualifying One, Pasma took P6 and Hadjar P9 after Hadjar was 5th fastest but unfortunately his best lap was removed for a track limits violation. However in Qualifying Two, the duo once again improved with Hadjar taking 4th and Pasma 6th for the Race Three starting grid.

Saturday afternoon’s Race One saw the beginning of a two race stint of bad fortune for 3Y Evans GP Team OLOI, with Hadjar finishing P10 and Pasma taking a DNF after incurring damage from hard contact with a kerb.

In Sunday morning’s Race Two, Hadjar had an ideal starting position of P3, with sights set on the podium or perhaps even a win. However, after dropping to 4th after a slow start, he made contact with another driver when going to retake 3rd and suffered a DNF.

Meanwhile, Pasma rocketed up from P19 all the way to P11 during shortened race due to a safety car, but was unable to finish after being hit by a competitor in the closing laps.

Sunday afternoon’s Race Three saw a return of good fortune for 3Y Evans GP Team OLOI, with the pressure on Hadjar and Pasma to turn the tide for the final race of the weekend. Hadjar started P4 and Pasma P6, and on the race start Hadjar immediately jumped into 3rd and Pasma into 5th. During the shortened race which saw a lengthy safety car period, Hadjar once again set a fastest race lap, and in the end took 3rd on the podium for the 4th podium in 6 races for 3Y Evans GP Team OLOI, while Patrik Pasma took a solid 5th.

While Round Three saw a turn of fortunes for 3Y Evans GP Team OLOI, the team was able to make a comeback in the final race and end on a solid note going into Round Four, when the Asian F3 series returns to the Dubai Autodrome. Round Four will kick off this Wednesday, February 10 with two test sessions, followed by two test sessions Thursday, Qualifying and Race One on Friday, Race Two on Saturday and Race Three on Sunday.   Please follow www.EvansGP.com for updates.

OLOI is a San Francisco-based motorsports-inspired line of apparel which focuses on blending performance with time-proven classics in its product line. For more information on OLOI, please visit: www.OLOIinc.com.

3Y Technology, based in Dubai UAE and Paul Ricard, France, is a professional racing team which competes in Asian F3, UAE F4, GT and Touring Car competition and testing, as well as driver performance development. Having won multiple racing championships throughout world class motorsports series, the 3Y Technology Team have proven their presence and high level of skills in the field. For more information please visit: www.3ytechnology.ae.